comparison between Le Danze and motifs that inspired them 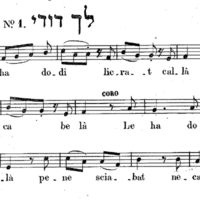 Music of the Jews of Tuscany 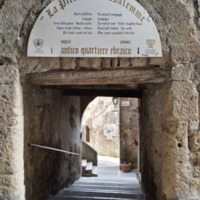 The Jewish community of Sannicandro Garganico, a small town in the north of Apulia, south Italy, was established around the 1920s by Donato Manduzio and after his conversion to Judaism. A farmer as most of his family's members, Manduzio fought in WWI. While serving in the army, he improved his very poor reading and writing skills, and upon his return to Sannicandro he gathered a group of fellow farmers and workers in his own house to read the Bible and discuss about theological and socio-political issues. Initially convinced that the Jews had disappeared and that what was written in the Bible were the vestiges of people no longer existing, his mission was to revitalise the "true" religiion and to establish a new spiritual "priesthood" based on a literal understanding of the Scriptures. Once he was told about the actual existence of Jews, he came in contact with the Roman rabbinate, and after WWII most of the fellow disciples and fellow correligionists formally converted to rabbinical orthodox Judaism, making aliyah.

A central role in the rite of Sannicando's converts was played - and partially still is - by women, sinnging mostly in local vernaculr and musically borrowing from local worker's tunes and popular music of the time. Many songs of the "Sannicandro rite" were recorded by Leo Levi between 1952 and 1959. They consists mostly of devotional texts written in Italian or local vernacular, on simple rhytmic and melodic patterns.

Born around the year 1070 in Oppido Lucano, a small hill-top town a few miles far the city of Potenza in the Molise region, to Dreux/Droco and Maria, an influential family of the Norman elite, Johannes was a Catholic priest who converted to Judaism around 1102, probably inspired by the conversion of Archbishop of Bari Andreas. As a former member of the Catholic church, Ovadiah used his music skills, more specifically the neumatic notation, to transcribe a set of melodies on Hebrew liturgical texts. It is disputed, however, whether the melodies he transcribed in neumatic notation are Jewish or Christian-Gregorian tunes combined with Hebrew texts, or contrafacta. He recorded his personal and spiritual vicissitudes in the so-called "Megillat-Ovadiah" (The Scroll of Ovadiah), transmitted by a series of fragmentary manuscripts found in the Cairo Genizah, that includes a "siddur" with a series of piyyutim (devotional compositions), namely "Mi 'al-chorev" for Shavuot and Simchat Torah, and "Barukh ha-gever" (mss. Cambridge, University Library, Taylor-Schechter, K. 5.41 and ms. New York, Jewish Theological Seminary, Adler 4096 [ex 8399]).

A comprehensive survey of the Cairo Genizah, with transcription and full translation is available at https://johannes-obadiah.org. A very detailed analysis of the music contents, together with a set of recordings of the neumatic melodies is available at the webiste of the Jewish Music Research Centre at https://www.jewish-music.huji.ac.il/content/mi-al-har-horev-manuscripts-obadiah-proselyte

Music of the Jews of Tuscany